Several weeks ago I received an email asking me if I had any naming patterns or traditions in my family tree that I would like to contribute to a podcast – I thought about it and remembered that some branches of the tree did have a pattern.  However, between the beginning of December until Easter is a very busy time in work, which leaves you physically and mentally drained at the end of the day.  I feel that it may now be too late to contribute to the podcast but since I have already drafted a few notes I have decided to type them up and publish them here.

The family they I decided to look at was that of my 4xGreat-Grandfather, His name was Edmund Boyce HUNTLEY and his family has two naming patterns that I was to address – Mother’s Maiden names as a given name and Forename inheritance.

Mother’s Maiden names as a given name

In this case, Edmund’s mother was called Elizabeth BOYCE.  As he come down the line we see some interesting (in my opinion at least) things.  Edmund’s wife was called Judith MOORE; their only son was also was Edmund Boyce HUNTLEY.  The couple’s daughter married Mary Jane HUNTLEY named her eldest son Edward Huntley KING who in turn gave three of his sons their mothers’ maiden names.

As you may already have realised, Edmund was used more than once in this family.  I have in fact found it used in eight generations of this family as shown in the below diagram: 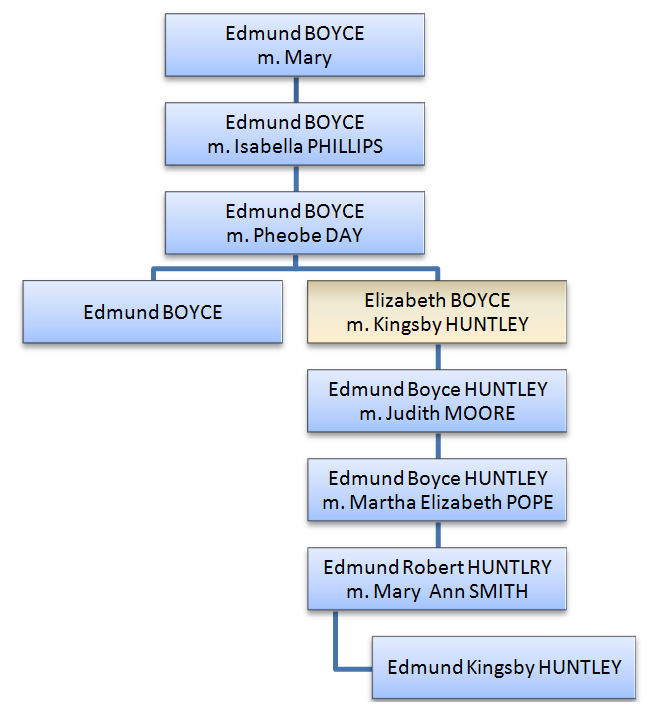 In summery more than one naming pattern can exist in a single branch of the family.  You may find that names are used repeatedly through the generations and that they sometimes form patterns as to the order they appear in.  For those of you interested in the podcast I mentioned earlier, it is called Genies Down Under.  Genies Down Under is a podcast that provides information and suggestions to those genealogist with Australian connections.
Posted by Rhosyncoch at 18:28 No comments:

Rhosyncoch
I began tracing my Family History when I was just 11 years old for not one or two but three separate class projects. I quickly realised how lucky I was to have access to as much information as I did. In the decades that have followed I have expanded my knowledge of both my ancestors and the resources available. We are all leaves on the same tree, we just haven'y met everyone yet.