A Letter to an Ancestor - Edward Huntley KING

Today I am writing a letter to one of my ancestors, I will be very shocked if I receive a reply from him but then again information is inherited in various ways so who know, he may send my an answer via another descendant.

I am writing to ask if you can fill in some gaps that I keep finding in your life and the lives of your immediate family.  You puzzle me, as the way documents record you seem to have mistruths and ambiguity laced within them. With that in mind, the following is what I have amassed from various sources and documents.

You were born Edward Huntley KING on 13 March 1851 in Kirkley, Suffolk, England to Edward Irvine KING, a police constable, and his wife Mary Jane (aka Jeannette) HUNTLEY.  As you child you moved around Suffolk and later to Surrey due to the changes in your father’s employment.  In April 1871, you were enumerated as Stone Mason lodging at the home of John ALEXANDER in Farncombe, Surrey, England.  Then on 31 August 1871, you married John’s youngest daughter, Emma ALEXANDER, at the local parish church.  One of the witnesses to that marriage was you own sister, Florence KING.

Your first child appears to be Edward Alexander KING who was born 3 January 1879, baptised 30 November 1879 and died 6 December 1879 of Teething Convulsions, all taking place in Lambeth, Surrey, England.  The following year you had a daughter, Kathleen Mary KING, born on 17 December 1880 in Lambeth.  In April 1881, Kathleen was enumerated at the home of your parents and sister in Goldalming, Surrey while you and Emma were enumerated in Streatham, London, England.  Sadly, Kathleen’s life was cut short and on 26 July 1882 in Battersea, Surrey, England by Pertussis (Whooping Cough) and Pneumonia.  The last child I can locate that you had with Emma is John Alexander KING born circa 2 Feb 1883 although I have been unable to locate a birth registration for him.  He was baptised 2 May 1889 at St John’s Battersea (along with 90 other individuals) and appears to have been left in your parents’ custody, as this where they resided.  John was enumerated with your parents in 1891 and attended a number of schools in the Battersea area.  I am still looking for a record of Emma’s death and latter records of John.

Meanwhile you were living in Hythe, Kent, England where on 18 March 1889 you married Bertha TOURNAY, daughter of William TOURNAY and his wife Sarah MARSHALL, at the Register Office in Elham, Kent while claiming to be a Bachelor.

Just six months later, on the 9 October 1889, Bertha bore her first child, Catherine Norah KING.  The 1891 census enumerates you, Bertha and baby Catherine in Hythe, Kent, England where you were a Stone Mason.  By 1901 two more children, Winifred Olive KING and Edward Tournay KING had been born (06 Oct 1891 in Hythe and 19 Nov 1898 in Dover, Kent respectively).  Another daughter was the next to be Born, Hilda Kathleen KING although she would always tell the family that you ‘forgot to register her’ she believed that she had been born on 9 April 1900 even though she is missing from the 1901 census.  The last child was born in 1904 and you named him Hugh Huntley KING.  When you were enumerated for the 1911 census, you and Bertha had the youngest four children living at home while Catherine was residing with her employer.  Interestingly Hilda’s age is recorded as 11 then changed to 10 on the census image. 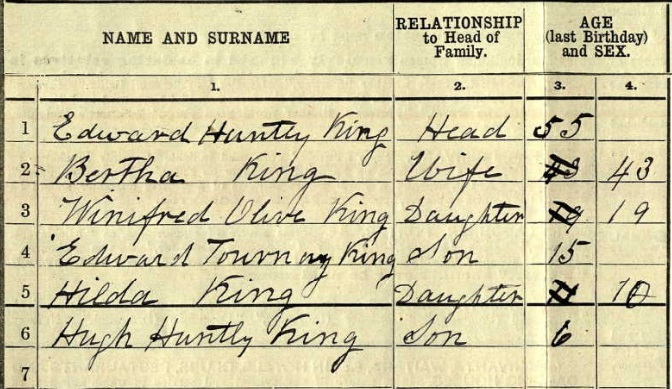 In January 1909, you found your way into the local newspaper, The Dover Express and East Kent News, as a result of falling from your ladder, which required you to seek hospital treatment.  The same newspaper provides us with your obituary and reports that you died 7 April 1915 and were buried at St James’ Cemetery on 10 April 1915.  There is no mention of Emma or the children she bore you in the obituary.  Only Bertha and her children are listed as mourners although Mr and Mrs Padgham sent you a floral tribute.

In conclusion my dear Grancha, what I wanted to ask was;-

Your Great-Great-Granddaughter.
Posted by Rhosyncoch at 14:03

Email ThisBlogThis!Share to TwitterShare to FacebookShare to Pinterest
Labels: A Letter to an Ancestor, Family History, Genealogy, KING

Rhosyncoch
I began tracing my Family History when I was just 11 years old for not one or two but three separate class projects. I quickly realised how lucky I was to have access to as much information as I did. In the decades that have followed I have expanded my knowledge of both my ancestors and the resources available. We are all leaves on the same tree, we just haven'y met everyone yet.